I spent three years in Japan about as far from Tokyo as you can get.

In the southeast corner of Kyushu is Miyazaki Prefecture (宮崎). 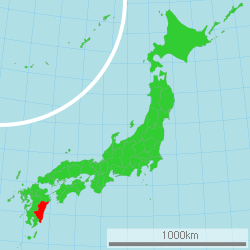 It’s considered one of the poorest prefectures in the country and seen by many as kind of a backwoods area–it’s like the Florida of Japan, but the crazy parts, not Orlando/Miami. It’s also the home of the Shinto religion and Japan’s first emperor, Jimmu.

Most of my posts will involve locations, activities, and festivals in Miyazaki.